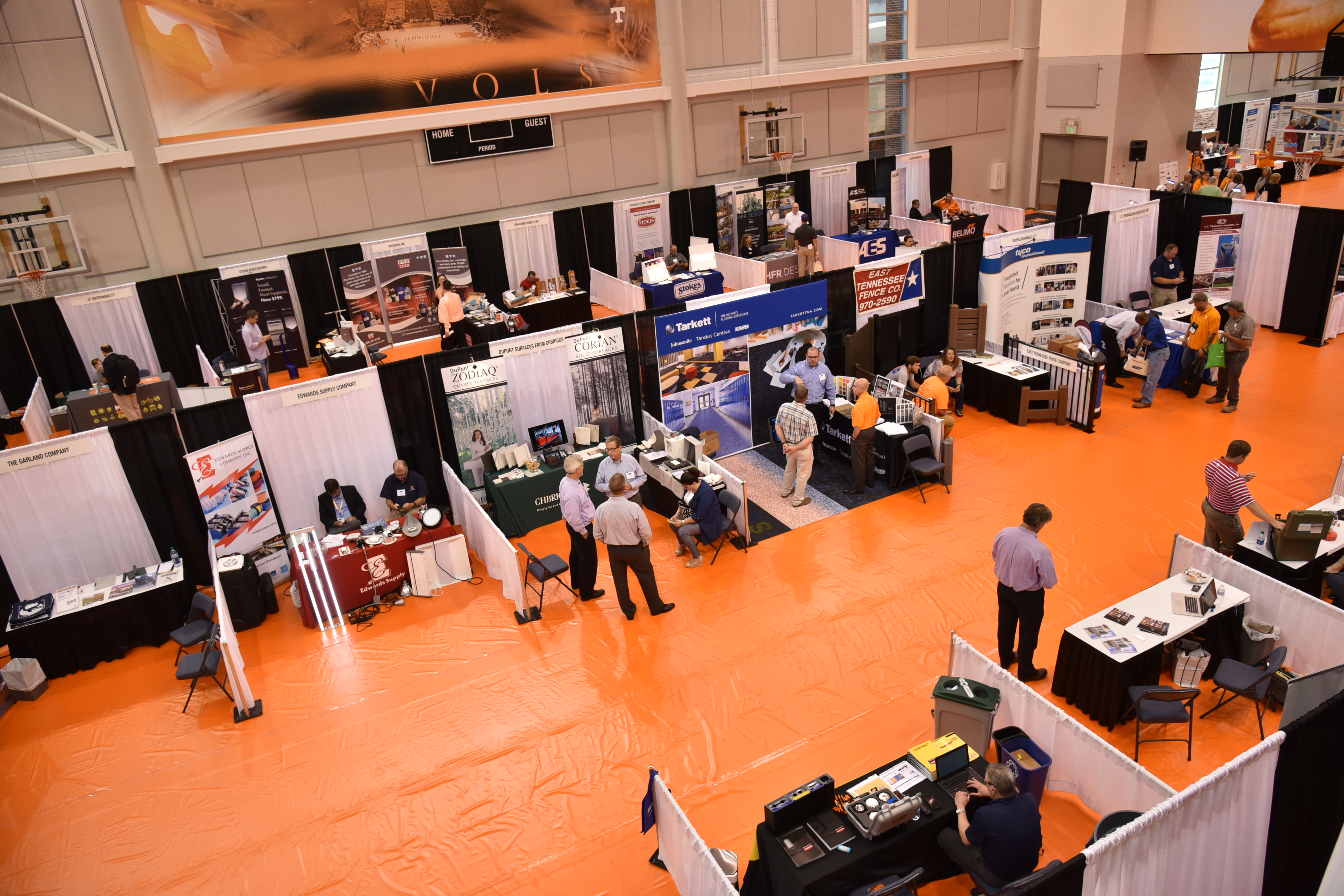 “Opportunities for Excellence”
May 15 & 16, 2017
Hosted by
University of Tennessee, Knoxville

The 28th Annual TNAPPA Conference was held May 15 & 16, 2017, on the University of Tennessee, Knoxville Campus.

An APPA group exam was held the first day of the conference where several individuals took the Credentialing Exam at the Facilities Services Complex.

The TNAPPA business and board meeting were held on Monday in the second floor lounge area of Pratt Pavilion.

The Welcome Dinner was hosted at UT Garden and featured live music provided by Handsome and the Humbles, BBQ, a photo booth, yard games and prize giveaways for the participants.

Tuesday participants were able to take a look at Stokely Family Residence Hall, UT’s newest housing facility. Both breakfast and lunch were served in the hall’s dining facility.

More guided tours were offered on Tuesday including the second Facilities Services Complex tour and a tour of the newly converted UT Steam Plant.

Dr. Bass is a world renowned speaker in the field of Forensic Anthropology, best known for his research on human osteology and human decomposition. He has also assisted federal, local and non-U.S.  authorities in the identification of human remains. He taught at the University of Tennessee in Knoxville, and though currently retired from teaching, still plays and active research role at the University of Tennessee Anthropological Research Facility, which he founded.

The facility, better known as “The Body Farm,” as named used by crime author Patricia Cornwell in a novel of the same name which drew inspiration from Dr. Bass and his work.

Conference Educational Breakout sessions followed Dr. Bass and were held in the Haslam Business Building. Participants had a wide variety of topics to choose from during three session times.

Tuesday then wrapped up with the TNAPPA closing banquet at the Knoxville Museum of Art where guests were invited to view three galleries featuring local artists. Live music was presented by The Coveralls.

The 2018 TNAPPA Conference will be held on the campus of UT Chattanooga. 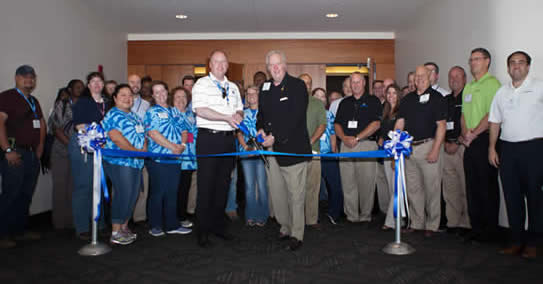 “Pride and Performance”
May 12-13, 2015
Hosted by
Middle Tennessee State University

The 27th Annual TNAPPA Conference was held on May 12 & 13, 2015 on the Middle Tennessee State University campus.  Forty-six golfers enjoyed a beautiful sunny day at Old Fort Golf Course competing for a chance to win several exciting trips, lots of gift certificates to the pro-shop and $10,000! That afternoon fifty-two (52) exhibit booths filled the ballroom, selling out the venue and everyone watched as David Gray, TNAPPA President and Dean Hansen, TNAPPA 1st Vice President cut the ribbon, to officially open the Hall of Resources.

Several took part in the MTSU Scavenger hunt. This provided a walking tour of campus and a chance to win a gift card by taking selfies in front of marked buildings on campus. SSC sponsored the Welcome Dinner which included a colorful Mexican fiesta meal. The evening Trivia Contest as a success with two tables winning beautiful prize baskets full of Tennessee products. 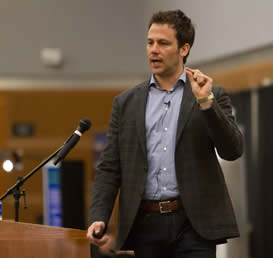 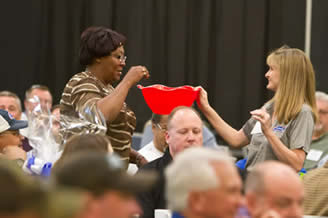 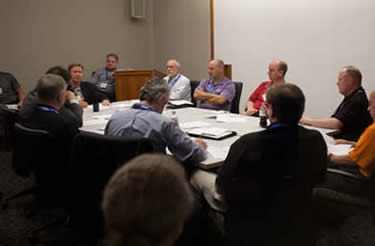 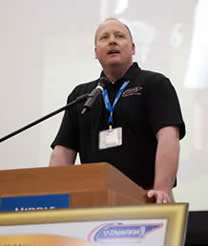 Wednesday morning started off with a hearty breakfast buffet and a warm welcome from David Gray, TNAPPA President and John W. Cothern, Senior Vice President of Business and Finance for MTSU.  Everyone enjoyed hearing Ryan Estis explain how to Unleash Your Inner Superhero during the Plenary Session.  He captivated the audience with his entertaining and heartwarming stories about customer service.  There were lots of decisions to make with 15 educational sessions being held.  Dave Maharry, SRAPPA’s President Elect spoke about the upcoming SRAPPA Conference being held in Baton Rouge, Louisiana at the Louisiana State University Campus.

Several conference attendees were selected to help out as characters which added mystery to the evening.  Inside the action started with a murder.  (not a real murder, though!) Each table was became a team and started their investigations. After a delightful dinner, everyone submitted their best guess as to who they thought was the murdered. After deliberation, only one table solved the murder mystery.  The murder was none other than our very own TNAPPA Secretary/Treasurer, Gerald Grimes who played “Eric”. What a great time and a different twist to a TNAPPA Banquet. One we will soon not forget. 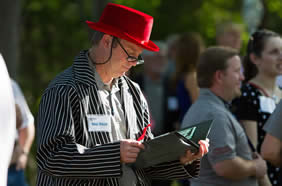 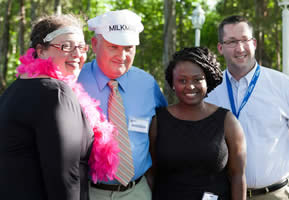 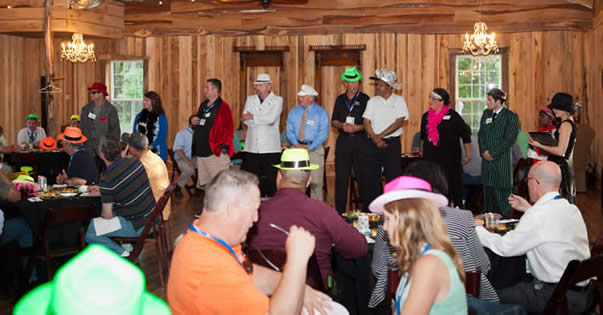 To view and order pictures from the 2015 TNAPPA Conference, visit the link below!

The Attendees and Business Partners had a choice between participating in a Golf Tournament or a Skeet & Trap Tournament on Tuesday, May 14, 2014.  There were 34 registered for golf and 6 for skeet & trap and everyone had a great, beautiful day of fun!   The evening started off with corn hole games, croquet, people playing horse shoes and other fun games.  Everyone enjoyed a wonderful picnic with southern barbecue and fried chicken and all the trimmings.  The rain stayed far enough away that we didn’t get wet, but it was to risky for the hot air balloon to make any trips.  The live band and live auction with TNAPPA bucks kept everyone entertained and we all had a fantastic evening.

The Conference Committee at Tennessee Tech put on a cute skit to start off the morning session on Wednesday, May 15, 2014.  Jack Butler played the flight captain and several members of the committee acted as flight attendants taking volunteers from the audience to help show everyone the “safety procedures” to help everyone get through the conference safely.  It was very funny!  Dr. Phil Oldham, President of Tennessee Tech University and Dr. Claire Stinson, Vice President for Planning and Finance welcomed everyone to the campus and encouraged everyone to learn as much as they could and enjoy their networking opportunities.  Paul Wuebold, SRAPPA’s Junior APPA Representative and the newly appointed APPA Vice President of Professional Affairs spoke about how APPA, SRAPPA and TNAPPA are working together and creating some really great training and credentialing opportunities for our members.

The TNAPPA Business Meeting started off with a roll call and a few changes to the bylaws and several new scholarship opportunities were voted on and approved. Everyone enjoyed the variety of classes they could choose from and visited the Business Partners during the breaks. There were lots of prizes given away at the closing session including ipads, TVs, tools, crafts from local artists and even a dog kennel!

The banquet started out with a train excursion to Monterey, TN with wine and hors devours served along the way. A dinner of prime rib and chicken was served at the Leslie Town Centre in downtown Cookeville where Jack Butler thanked his Conference Committee once again for a great conference and then handed the gavel to David Gray to become the new TNAPPA President for 2014-2015.

Thank you Business Partners for your continued support because YOU make this annual event possible.

Lots of pictures were taken by Jim Dillon, TTU and Kelly Ostergrant, MTSU.  Click Here to visit Snapfish where you can view and even order prints from this year’s conference!.

Join us NEXT YEAR at Middle Tennessee State University when we celebrate the 27th Annual TNAPPA Conference on May 12-13, 2015. 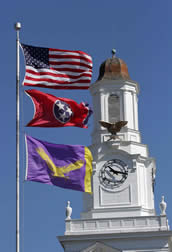 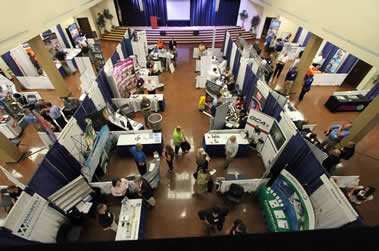 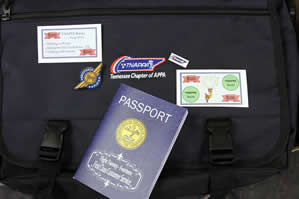 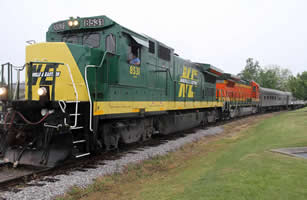 The 25th Annual TNAPPA Conference and Vendor Show was hosted by The University of Tennessee at Martin in Martin Tennessee. Tim Nipp and the entire physical plant crew worked very hard to make this event a huge success.

The two day event started off with a golf tournament which was held at the beautiful Paris Landing State Park.  Attendees enjoyed a Welcome Dinner on the lawn in front of the Boling University Center which included southern fried catfish with all the trimmings!  Dessert was served in the vendor hall giving everyone time to visit with the vendors before a door prize drawing for an iPad. All of the meals were delicious! – catered by B.J. Long, Head Chef with Sodexho.

After an optional morning workout and hearty breakfast, everyone headed to the opening session where students from the Alpha Psi Omega chapter performed a skit showing their appreciation for all workers of physical plants and facilities. Nancy Yarbrough, Interim Vice Chancellor for Finance and Administration was also there to welcome everyone to the conference.  Educational sessions were held throughout the day and there was an optional tour of the Discovery Park in Union City.

The closing session was a “must attend” event with premium door prizes like cordless drills, trimmers, TVs, gift certificates with a grand prize of a $500 gift certificate to Walmart!  A Huge Thank You goes out to the over 30 local businesses who contributed items for this event. The conference concluded with a delicious prime rib dinner and an amazing show by Jason Michaels, The Fortune 500 Magician.

Click HERE to see all of the photos and order prints.

The 24th Annual TNAPPA Conference and Exhibit Show was hosted by Tennessee State University on May 14-15, 2012 at their Avon Williams Campus in downtown Nashville, Tennessee.  The golf tournament was held at The Governor’s Club Golf Course in Brentwood, TN. followed by a welcome dinner held at the TSU Indoor Athletic Facility.  Attendees enjoyed hearing about APPA, SRAPPA and TNAPPA and how we all fit together by David Gray, President of APPA International.  With “Sustaining the Legacy in Nashville” as the theme, there were many educational sessions centered around sustainablility as well as maintenance, custodial services and stormwater initiatives. The conference concluded with a banquet on the historical General Jackson Showboat with a cruise on the Cumberland River.  Everyone enjoyed a delicious dinner and an incredible show featuring music from Tennessee. 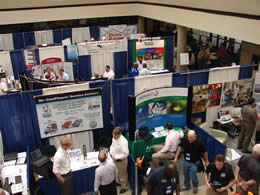 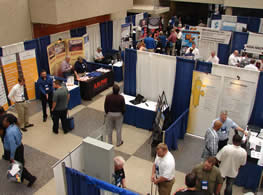 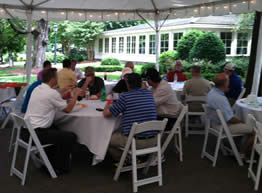 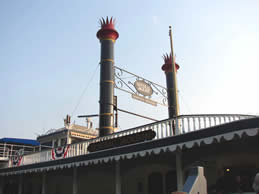 Click HERE to view all photos from this event.

ETSU hosted the 23rd Annual TNAPPA Conference and Trade Show in May, 2011 focusing on “Best Practices in Facilities Management“.  Educational sessions included Health & Safety training, water treatment, energy savings, natural gas purchasing, custodial inspections and much more.  The trade show provided participants with networking opportunities with leading business partners in the field.  Natalie Manor, nationally recognized speaker, entrepreneur, executive coach, and co-author of several books, including Roadmap to Success, was the keynote speaker for the conference.  The conference concluded with a banquet at the Bristol Motor Speedway and included a private tour.  The attendees enjoyed getting to take a few laps around the track. 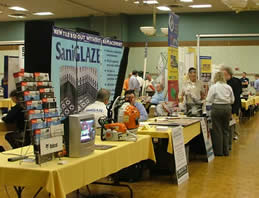 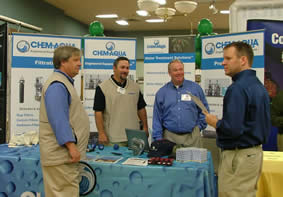